Beyond the Fence, Below the Grave is a tabletop rpg inspired by the history and mythology which surrounds the practice of magic in pre-medieval Scandinavia.

Players take on the role of a team of practitioners of magic who use their supernatural abilities to investigate Otherworldly disturbances, determine what kind of entity is responsible for them, and appease the entity in whatever way they can before performing a ritual to repair the relationship between this world and the next.

-4 magical specialists to play as, each with 7 unique abilities

-A bestiary of 10 Otherworldly threats

-The Season's Houses, a sample scenario

Beyond the Fence, Below the Grave.pdf 650 kB

Beyond The Fence, Below The Grave is a tabletop rpg about keeping the balance between the mundane and magical worlds in old Scandinavia.

The PDF is clean and easy to read, with a strong osr zine feel. It's relatively bare, but that starkness highlights the game itself, and that isn't a bad thing.

The closest thing I can think to compare Beyond The Fence to is Vaesen, a game I adore, but the time periods of the two pieces are very different, and Beyond The Fence absolutely stands on its own as a system.

Characters in Beyond The Fence are build from four stats, called Essences, which are used as the DCs for rolls. So an easy task might be a d4, and players try to roll that d4 under their most relevant Essence.

The gameplay focus in Beyond The Fence isn't on combat, but there is still damage and it's taken directly by your Essences, wearing you down every time you rush into a situation without taking time to lower the difficulty.

Individual character classes have ways of mitigating this, and there are a *lot* of options for players to choose from when building a character, but everything feels tight and flavorful. The game somehow manages to do this without feeling restrictive at all.

Scenarios for Beyond The Fence focus on investigation, and the core book includes a list of potential harms that otherworldly forces can sow, as well as a list of otherworldly forces and the harms they can perform. This makes things a bit like Phasmophobia, where encountering danger helps you diagnose and eventually cure the source of that danger.

Scenarios all conclude with a Crisis Ritual, a single roll to try and drive out the otherworld force that's making trouble for the people of the region. Crisis Rituals have better odds of succeeding when you've researched the force in question and when you've taken steps to appease it. If you've instead angered it or don't know much about it, the ritual is harder.

As far as GM tools go, a very thorough guide to old Scandinavia is provided, as is a quick reference for pronunciation. There's also a starter scenario, Season's Houses, and it's *very* good as a mystery, however it takes an unusual approach to the genre (at least for trpgs.) Breadcrumbs do exist, but there's a lot of herrings, and the truth is relatively obscured. The players will have to dig deep and guess correctly, and they'll know if they were right based on whether the Crisis Ritual worked. Also there is a timeline for the investigation, and it is harrowing how rapidly and eerily the supernatural disturbances escalate.

Overall, I think this is a hidden gem. It's straight up the best mystery rpg I've read. It uses a clever, well-researched setting but also makes it accessible to people who aren't already familiar with it. It has easy to learn mechanics but relies a *lot* on deduction and investigation, not just rolls to solve things. This game is a fantastic thing, and I plan to be recommending it for years to come.

An RPG on Scandinavian mythology, where you play as magical specialists who investigate supernatural disturbances. Apart from the rules, it includes a detailed setting guide and a sample scenario. I love how the game is about investigation rather than combat. There no monsters for the players to slay, and the supernatural beings can only be placated (or sometimes banished). 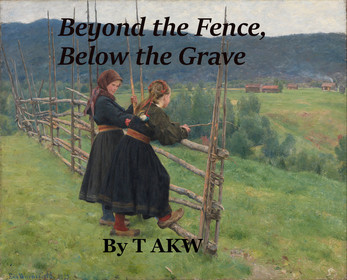 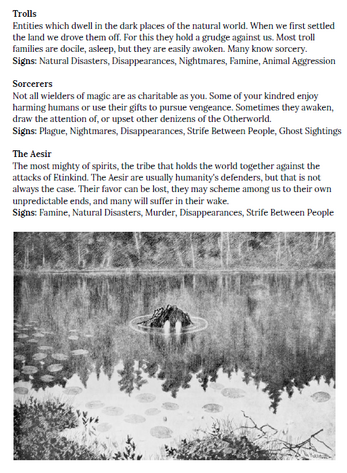 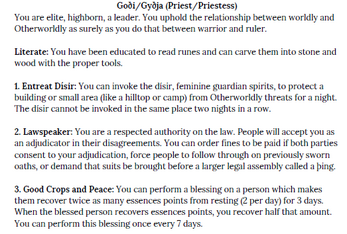